I would be deficient in my duties as cartoonist/blogger if I failed to mention the triumphant return of Bill Watterson.  Bill, as you faithful readers may recall, took the funny pages by storm in the mid-eighties with his comic strip “Little Nemo in Slumberland.”  Nah, just kidding.  He’s the dude who drew Calvin and Hobbes, the comic strip that caused me to forsake my burgeoning career in astrophysics and become a cartoonist.

Another great cartoonist, Richard Thompson, who I have written about in this blog, started a charity  called Team Cul de Sac.  Professional cartoonists will donate original art and it will be auctioned off, with proceeds benefiting Parkinson’s research.  Before the paintings and drawings are scattered to the wealthy patrons of the world, they will be scanned and put together in a book, with the proceeds also  donated.  It is a more than worthy cause, and a fun way to see Richard’s comic characters reinterpreted by fellow cartoonists.

Last week, a mysterious FedEx package arrived in their offices, which upon opening revealed itself to be the first publicly-displayed Bill Watterson art since he retired Calvin and Hobbes in 1995. 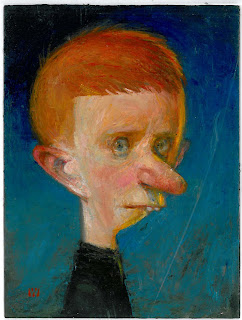 This is a rendering of Petey, Alice’s older brother.
Petey likes reading comics in which no action happens.

When Ol’ Bill retired, he claimed he would be painting (among other interests) and it seems he has indeed kept that promise.  He could not have picked a better reason to resurface, as this painting will bring John-Lennon-drank-out-of-this-cup-in-1968 money to a worthy cause.

It also gives me hope that Bill Watterson has not become a J.D. Salinger-type recluse, holing up in a shack in the Ohio woods with his shotgun and a snarling dog.  He has been happily living his life, painting and probably working as an undercover CIA agent.  Wouldn’t it be great to see a Watterson painting exhibit in some small gallery in Northeast Ohio?  It may even overshadow the fact that none of their sports teams seem to make it beyond the first round of the postseason.

In the meantime, I’m enjoying this painting as much for its artistic merit as for its authorship.  Isn’t it hilarious?  I’d love to see it in one of those elaborate gold frames, hanging next to Victorian portraits of rich fat people.  Somebody ought to smuggle it into the Louvre.

3 replies on “the hanging of bill watterson”

This post is so awesome, I can't see straight. Is that really his?

Where will Watterson surface next?

I am Chris Sparks who started Team Cul da Sac. Thank you for covering us and yes folks, it is an oil painting by Bill Watterson. Beautiful!!!
Go to http://teamculdesac.blogspot.com
to see who is contributing!