[This originally appeared as an at the top of the site to explain the origin and reason for my comic strip, Welcome to Falling Rock National Park (2006-2012). I am reprinting it here as a post.]

My previous comic strip, The Family Monster, ran from October 2002 to May 2006. While I was writing it, I began to develop the idea for Welcome to Falling Rock National Park. I moved from Colorado to Oregon in the summer of 2006 and the timing seemed right for a change.

That’s the short version. Here’s the longer one.

The characters in The Family Monster were created in my senior year of college. I was finishing up my college comic strip, Atticus and Glen. Atticus was a wise old squirrel and Glen was a naive college student with a strange hat and a large dot on his shirt. Glen’s unrequited love was a fellow college student named Dee.

When I graduated college, I left the characters of Atticus and Glen behind. I decided that they belonged to that world, and since my life was about to change drastically, my comics had to reflect that.

The Family Monster was the first comic strip I did after college. It ran in The Colorado Daily. I am still amazed that they took a chance on me, given the horrendous comics I gave them to review. After a few years in that paper, I was picked up by the McClatchy-Tribune Campus, a college-friendly wire service. The Family Monster could then appear in any college paper that subscribed to the MCT Campus. Welcome to Falling Rock National Park is still thankfully run by this service.

For The Family Monster, I took Dee back in time to when she was just a girl growing up in the Arizona desert. Three monsters – Monster, Dirch, and Eggman – moved in with Dee to scare her silly. They failed miserably. Nevertheless, they stayed on, living in an underground fort in Dee’s backyard. The strip came to be about the interaction of the four main characters’ personalities.

The Family Monster was fairly open-ended in terms of the stories I could tell because of guest characters. If I wanted to do a story about pirates, I’d have pirates visit. If I wanted to tell a scary monster story (as opposed to the decidedly unscary three main monsters), I would bring in a character called Brulock the Destroyer. Another recurring character was Monster’s brother, Theo. Theo had renounced his monsterhood to become a wandering Buddhist, much to Monster’s dismay.

I had a lot of fun with The Family Monster. It was a comic strip that could never be syndicated, though. The responses I got from the syndicates (who, in turn, sell the comic to daily newspapers) were: the art is too alternative and the story not accessible enough. I also grew tired of the restrictions of drawing the monsters – they were basically sticks with heads, and I wanted to draw characters more capable of expression.

When I thought to set a comic strip in a National Park, I got the same feeling I do whenever I see vast possibility in front of me. I don’t know where I’ll end up, but it will be a long, long ways from where I started. Just as if I was visiting an actual National Park, there are many directions I can go without sacrificing the cohesiveness of the comic strip. The landscape is very much a part of the story.

Dee is still around. This time, I’m taking her to her first job after college. She’s a park ranger. She’s easy to spot: she has the big goofy hat. Maybe by the end of my career I’ll have told Dee’s entire life story. I would like that.

I learned a lot from drawing The Family Monster, and I appreciate everyone who took the time to read it. 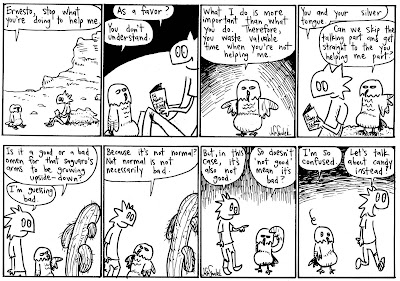 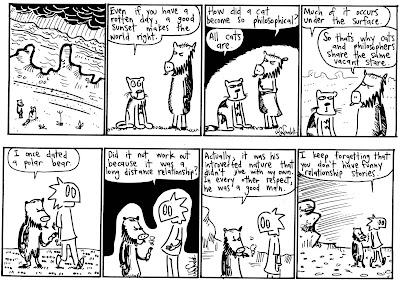 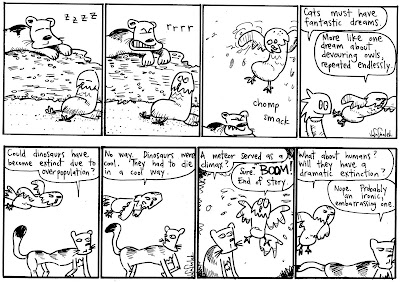 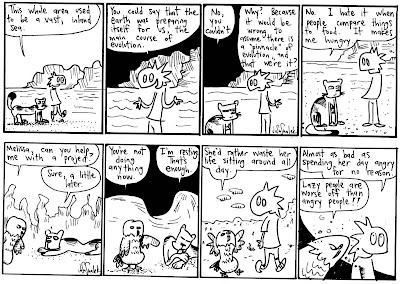 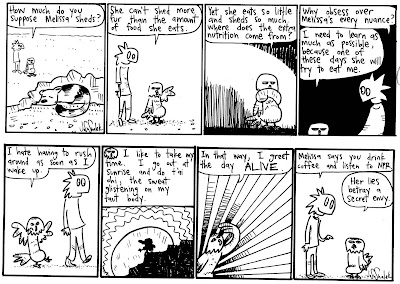 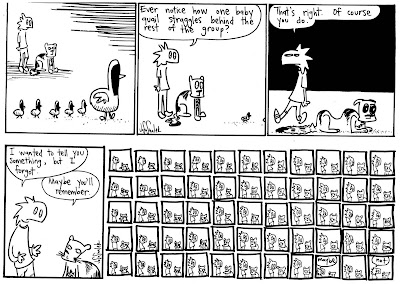 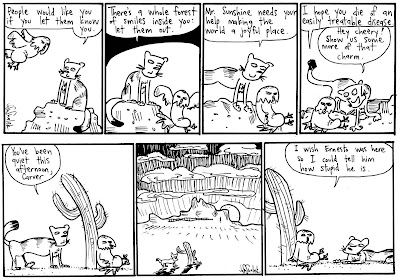 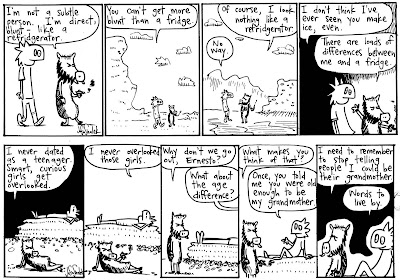 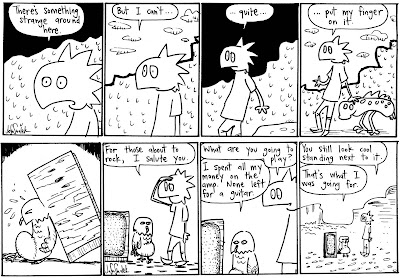 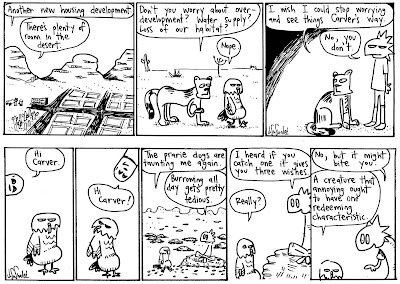 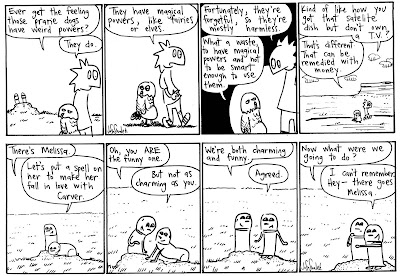 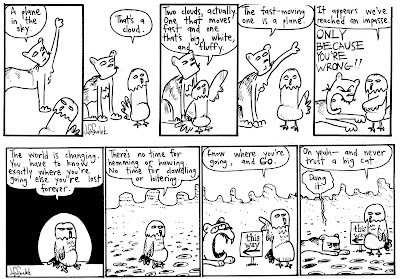 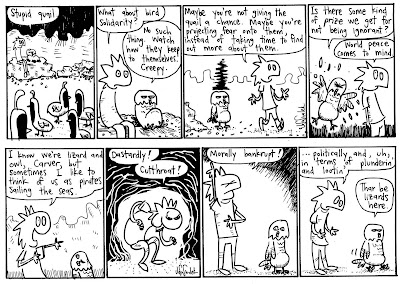 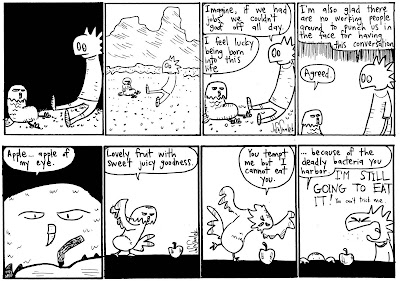 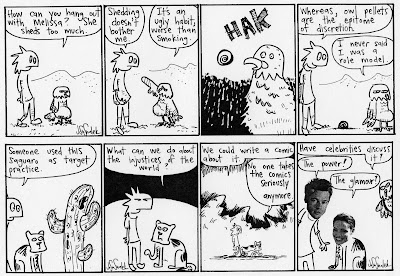 Read the news last week that United Media, a syndicate that once managed Peanuts and Dilbert, will turn over their comic strip properties to Universal uclick.  For those of you keeping score, we’re down to three viable syndicates:

Universal uclick (in my limited experience, the most active syndicate)

King Features (once a fine syndicate, but they haven’t done much in the last decade)

Washington Post Writers Group (only syndicates a handful of comics; the upside is most of them are good)

The other “syndicates” (I use that term loosely as they rarely launch new features) are Tribune Media and Creators.

Comic strips continue to be profitable and, most importantly, read.  It’s been clear for some time that newspapers don’t want to run comics.  Maybe they should cut the cord and see what happens (hint: final nail in the coffin).  The internet is becoming an increasing revenue source.  Many un-syndicated cartoonists (hint) are either solely web-based or they use their website to increase their audience.

I’ve always liked to read comics on paper.  Call me Old Timer.  That’s why I self-publish books.  Anybody can go on my website and read, for free, the entire run of Falling Rock.  I haven’t heard from many people who actually do that.  I do hear from the people who read my books.  Maybe we’re all Old Timers.

Are books the future of comic strips?  I would be more than happy with that outcome.  Universal syndicate is essentially the same company as Andrews McMeel, a book publisher.  They publish not only their own comic strip properties but those of their until-now rival United Media.  Universal could be a web and book syndicate.  It seems as if they’re heading that way.  Newspapers are cutting themselves out of the loop.

Why are newspapers so stupid?  Ask David Simon; after he was fired from the Baltimore Sun, he went on to write The Wire.  But that’s a topic for another post.

Is this good news or bad news?  I am uncertain.  Universal is certainly the most forward-thinking comic syndicate out there.  I’m glad United Media’s cartoonists have a place to go where they will be treated with respect.  On the other hand, that’s one less submission I can send out this year in the hopes of finally getting syndicated.  On the first hand again, Universal has seemed like my best shot for a couple years now.  There are so many unknowns.

If you’re reading this post, it means I’m doing something right, and that’s really the most important thing.  Thank you.  Now let’s get back to the funny stuff.

Most newspaper editors keep “legacy” strips (those comic strips that have outlived their creators) based on a negative-feedback system. That is, they may try to pull, say, Blondie, but quickly recapitulate when a few irate readers write or call to complain. They don’t get a lot of positive feedback (eg “You should run Cul de Sac because it’s actually funny“). There must be a better way to find out which comics are actually being read in the newspapers.

The Nielson Ratings, although somewhat obtuse, seem to work for television networks. They can judge how successful a show is by its number of viewers. Box office sales determine the success of a movie. Bookstores literally count the number of books sold, which contributes to bestseller lists.

The popularity of comics is a harder commodity to tabulate. You can’t judge how many people flip to that section of the newspaper, let alone which comics they peruse.

One good indicator of a comic strip’s popularity is how well it sells when collected into book form. Calvin and Hobbes books were still selling very well when I worked at a bookstore, and that was about seven years after Watterson decided to retire from the biz. I never saw a Blondie book collection, although the local paper did run it. That isn’t the only comic not to be regularly collected. Check the newspaper, then check your local bookstore or Amazon. Some comics really do disappear after they run in the paper.

Another indicator might be how often that comic is viewed online. People who don’t believe computers are the Great Satan like to read comics on the internet. I would like to ask the syndicates which comics receive the highest hit counts per day. Instead of hiding this information, syndicates should be sending it to every news organization. What comic is #1 online? Just like people are interested in the top-grossing movie of the week, we would love to follow the success of our favorite comic strip characters.

Knowing which comics are the most popular would only increase people’s interest overall. How often do comics get mentioned in mainstream media when they’re not being made into a movie or TV show? Talking about comics for the sake of comics would get people more interested in the art form itself. It would also turn the conversation from the dreadful “all comics are stale and out-of-touch” to a more positive tone.

So what do you say, syndicates? Is there a way to tabulate the most widely-read comics of today?