I have been chipping away at issue 7 for the past few months and I am happy to report I will finish inking it by the end of the week!
I can’t wait to share this new story with all of you. Stay tuned for updates regarding print date. It will be ready well before San Diego ComicCon in July. 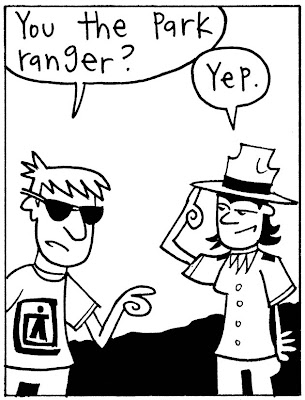 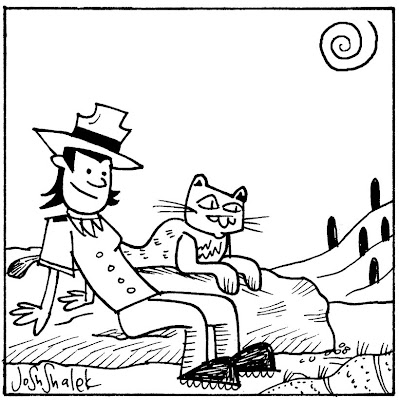 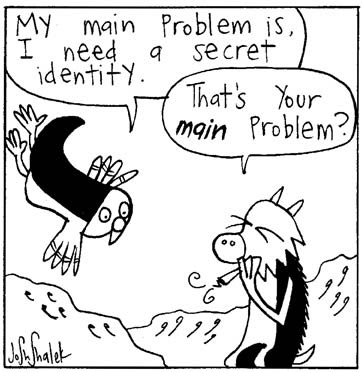 Falling Rock returns for Season 5 today.  I’m so happy to be back.  If you could see me you’d know I’m dancing from one foot to the other in giddy glee.  It’s really hard typing this way.

This strip, along with the next two weeks’ worth of strips, was actually drawn way back in May.  It’s nice to have these finally see the light of your computer screen/iPad/3-D glasses.

To start the year off right, I picked an episode talking about the Falling Rock park in general.  Carver is, as usual, angry at natural phenomena way beyond his powers.  Park Ranger Dee is simply liking her job, up until the owl outburst.  I think Dee’s love for her work is tempered by her frequent proximity to Carver.  They’re opposites in many ways.  Dee came to the park voluntarily while Carver was born there and cannot leave.  Dee is tall, feminine, young.  Carver is a short, angry man.  He’s older than Dee in owl years, but I’m really not sure how owl years work – it’s more complicated than Celsius to Fahrenheit, I know that much.

Of all the characters, Ernesto the lizard is able to absorb the most of Carver’s vitriol without stomping off.  Dee finds Carver interesting as a case study.  If she were a psychologist she’d probably follow him around all the time, then write a bestselling psychological profile on him.  As she is simply a Park Ranger, Dee mentally catalogs Carver’s moods and then goes back to her dorm where she can determine how much of it is an owl thing and how much is Carver.

Even though Steve Lieber is a Portland-based cartoonist, I met him all the way down in San Diego last year at ComicCon.  I immediately felt a connection with his work; his emphasis on location as a character in the graphic novel Whiteout really hooked me.  He realized Antarctica is not just a cool place as backdrop; he made it integral to the story (a murder mystery).  After reading part 1 of Whiteout, I immediately got part 2 and was just as taken with the purposefully messy & white art.

When I gave Steve a copy of my Falling Rock book collection, he reciprocated with a new story he was working on with Jeff Parker: Underground.  Underground is the story of a cave system in Kentucky and the park rangers whose job it is to protect it.  While my natural affinity for caves drew me in initially, it was the art and story that kept me reading.  The state park is under pressure from local business to ‘open up’ the cave for tourism; however, the rangers are skeptical that letting hordes of visitors into the cave will cause irreparable harm to its delicate ecosystem.

Park Ranger Wesley Fischer immediately endeared herself to me, for obvious reasons.  Besides being a pretty outdoorsy girl, Ranger Fischer is a complete character from the start.  You can feel her love for her work, coupled with a natural stubbornness that is exceedingly cute.

The story is propelled by two misunderstandings: Ranger Fischer’s disgust that tourism dollars may be put ahead of a natural wonder, and the townspeople’s irritation that a new park ranger would want to hinder them from making a living.  It is a common debate in towns that don’t have much in the way of commerce or industry and want to exploit their scenic locations for tourism.  How do you balance nature and people?

Don’t imagine for one minute that this is a story devoid of action.  Lieber and Parker spin a tale so compelling that I read the entire collected volume

Still not entirely sure you’re interested?  Well, they’ve generously put up the first chapter FOR FREE online.  Read it and decide for yourself.

For the inevitable Falling Rock movie, my humble suggestion for the actress to play Dee:

Books I never thought existed do, in fact, exist. Thanks to the library, I picked up two books on the history of the National Park Service. One of them is dedicated entirely to women’s ranger uniforms.

Dee’s current uniform is based on an older style of ranger outfit, although I’ve given her pants instead of the skirts women rangers had to wear through most of the last century. Can you imagine enduring a snow-covered trail in Rocky Mountain National Park or the blazing heat of Saguaro National Monument in a skirt? I’m glad I can’t.

The drawing above is based on a 1970’s uniform which I quite like. Maybe I’ll give Dee a few changes of clothing this year, just to change things up a bit.

I wish that Sundays were twice as long as every other day. You really need more time to prepare for the upcoming week, mentally and physically. You need to enjoy your Sunday funnies, have your breakfast of choice, lounge around in your pajamas until a little after noon. Then you need to fit in all the errands you never got around to all week. Then you should have some free time. That’s what weekends are for, right? Then a nice dinner and some time in the evening. There is too much cramming if you want a Sunday done right. If elected President, I promise to make Sunday last until midnight on Monday.