When my brother came to visit, we watched the Chandelier music video and had a fantastic idea.

When I graudated from my crumbling public high school, I went to college.  When my brother graduated from his upper-crust prep school, where the students rode horses and wore tweed jackets to class, he drove his pickup truck north to Canada.

His travels led him as far as the Yukon Territory.  The only thing that kept him from Alaska was a patch of black ice.  When he got back home, safe and sure of what his livelihood would be, he told me the story of his involuntary weeklong stay in Whitehorse, the capital city of the Yukon.  Me being me, I turned his story into a comic.

What appears below is exactly how my brother told it to me, with the minor exception of the name of the bar.  He never told me the name, so I made it up.  Fortunately he escaped his accident with no major injuries, but he was forced to wait in Whitehorse until the necessary replacement parts arrived for his truck.

I originally shared this in a student-run cartooning class I took my senior year of college.  Hooray for the internet, now everybody can read it.

The thing I like best about King Kong is his unadulterated rage. When he beats his chest, it is the purest emotion in all of cinema. It is this rage that puts Kong above a mere technical feat: the special effects serve the character. King Kong becomes real. He fights that dinosaur not out of social obligation but from a primeval rage that flows through his primate heart. He breaks free from his shackles and climbs the Empire State Building partly for love, but mostly because he is royally ticked off (pun intended). And who could blame him?

My point is, King Kong was a huge hit not because of the cutting-edge technology that brought him to life, but because he was a true Hollywood icon. Put Kong up there beside Hannibal Lecter, Jack Torrence, and Alan Rickman in Die Hard as indelible performances in movie history. Kong deserves to stand beside (and tower over) the most revered movie nemeses of all time.

I finally got to see Avatar in IMAX 3D. Sitting in the very front row, my first thought as the landscape of Pandora flew across the screen was “if I throw up, I will make sure to do it on my brother’s lap.” Fortunately for him, I did not experience motion sickness from the 3D experience. I just sat back and enjoyed the spectacle.

Avatar has been so successful not because of its plot. The story is what my grandmother would have called “a space western.” Cowboys and Indians, the industrial machine versus the Noble Savage. We also get to find out what James Cameron did these past ten years. He watched CNN while eating his cereal in the morning, then wrote what he had just seen in the afternoon. A story can hardly be called allegory when you have a line like “fight terror with terror” and a corporation that behaves exactly like certain American corporations in certain mineral-rich countries halfway around the planet.

But what the heck. Nobody ever accused James “BIG EXPLOSION” Cameron of being too subtle. Or, as the saying goes, “I’m not stupid and you’re not exactly subtle.” Avatar succeeds on spectacle and in creating a world rich in detail: the forest-moon of Pandora.

The protagonist of the film is certainly not Sam Worthington’s grizzled Marine, Corporal Jake Sully. Nor is it Sigourney Weaver; although she does put in a truly noteworthy performance as chain-smoking research scientist Dr. Grace Augustine, who is hell-bent on educating the Na’vi (those giant blue cat-people) and converting them to Christianity. The film’s protagonist is not Alan Rickman, nor is it the Ewoks. It is the prettiest cat lady of them all, Neytiri (played by Zoe Saldana, also a new resident of my List).

It is Neytiri who ultimately carries the film. Neytiri is the movie’s King Kong – a creature only completely realized onscreen, a technological marvel who also happens to have as much character as any of the humans acting beside her. Unlike past computer-generated characters, Neytiri is beyond the point of mere intellectual curiosity. Maybe it was just me, but when she hissed at that robot near the end of the film while trapped underneath a Pandorian saber-toothed tiger, all thoughts of the animation that went into creating her flew right out the proverbial window. I was there, rooting for that cat lady.

I enjoyed Avatar. Sure, it wasn’t exactly 2001: A Space Odyssey in terms of coupling groundbreaking special effects with incredible story. But I do find myself thinking back on it days after I saw it. In today’s world, with so many stories competing to grab and hold your attention, I find that remarkable. There are many movies I could barely recall for you, and some others I wish I couldn’t, but I reckon Avatar will never be among them.

My brother generously got me a book of Hannah Montana stickers for my birthday. Obviously, I had to use them.
I like the sticker that says “Part Time Pop Star.” It means that half the time she’s just Billy Ray Cyrus’ kid.

This next piece is a bit psychedelic.

A lot of people have asked me how Miley Cyrus came up with her stage name, Hannah Montana. It isn’t hard to find out. In her book, Chronicles Vol. 1, Cyrus says, “one time [a friend] asked me why I was using a different name when I played, especially in the neighboring towns. Like, didn’t I want people to know who I was?”

She wanted a name that encapsulated her identity. “What kind of confused me later was seeing an article in a Downbeat magazine with a story about a West Coast saxophone player named David Allyn. I had suspected that the musician had changed the spelling of Allen to Allyn. I could see why,” Cyrus continues. “It looked more exotic, more inscrutable. I was going to do this, too.”

“The first time I was asked my name in the Twin Cities, I instinctively and automatically without thinking simply said, ‘Hannah Montana.'”

That’s how real musicians do it, dear readers.

Today’s Friday Robot was drawn during a conversation with my brother about moonshine whiskey. Background added later. Dinobot thrown in for good measure. 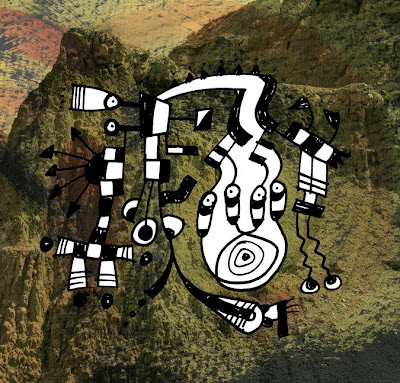 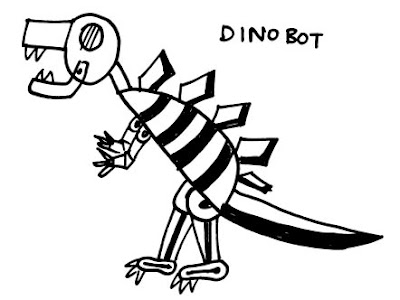