Let it Be was the final Beatles album released. It was not, however, the final album they recorded. Abbey Road, a superior album in almost every way, was the Beatles’ farewell to their fans. The final full song on Abbey Road is even called The End. You can’t get more explicit than that. But for reasons of apathy, the Beatles had recorded but never bothered to release the album that would be called Let it Be.

Since the Beatles didn’t want to do it themselves, and since longtime producer George Martin had never been involved (which, I think, hurt his feelings a little bit), the hours of tape were handed to Phil Spector with the hope that he would make an album out of it.

Spector, known for his Wall of Sound approach to recording, wasn’t the best choice for the album. Let it Be was supposed to be a live album: all songs recorded in one take, with no overdubs or studio trickery. Spector had become famous for doing the exact opposite. He’d record a piano playing a certain part, then have that person play the exact same piano part twenty more times so that it sounded like a piano army. The Wall of Sound was an assault to the senses at a time when records were rarely recorded using more than four tracks. Asking Phil Spector to make a stripped-down Beatles album would be like asking the WTO to please think of the poor countries in their trade agreements. They’re just going to get steamrollered.

Spector did just what he always did when making an album. He hired an orchestra and started adding bits to almost all the songs. He did show some restraint on songs like Two of Us and I’ve Got a Feeling, but on the whole the album would never be mistaken for “live.”

Strangely, he included bits of studio chatter between the songs. Normally this would add to the illusion that you’re listening to a live album, but Spector sabotaged himself with the huge orchestrations and intricate arrangements of the songs themselves. When you’re listening to Dig It, a fun jam, it sounds like the four (or five, with Billy Preston) musicians playing together in a room. Then you are jarred by the sound of dozens of musicians playing The Long and Winding Road. Are we in a studio where an entire orchestra can sneak in and set up completely unnoticed? No. We are in the middle of a Phil Spector record.

Let it Be manages to be neither a live album or a completely finished one. In spite of that, there are moments of greatness. No one, not even the Terrorists, will deny Let it Be is a great song. George’s guitar solo on that version of the song (different, I don’t know why, than the single version you hear on the radio) is his greatest solo ever. In I’ve Got a Feeling, hearing John singing his part in the right speaker while Paul’s in the left is just really cool. Two of Us and Get Back are a couple of Paul’s fantastic songs. (I still like Get Back even though it gets played to death on Tucson radio.) Across the Universe is John’s best work here, and I always enjoy George’s Blues pastiche For You Blue.

Taken as a series of singles, Let it Be works. But as an album, it suffers from lack of organization, probably because the people making it never really cared about putting it together right. Throw in one nutjob to produce it, and you’ve got a very good Beatles album instead of one of their best.

It just goes to show how good the Beatles were: even Phil Spector couldn’t totally ruin a Beatles album. 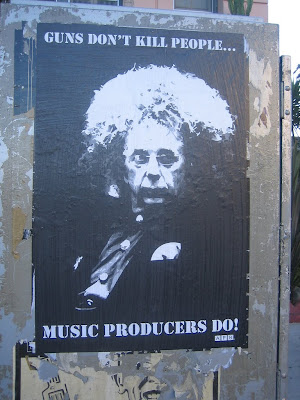 2 replies on “let it be: the album even phil spector couldn’t mess up”

Phil Spector is now where he belongs. He can't hurt any albums anymore.

He should have been locked up long ago for crimes against music.