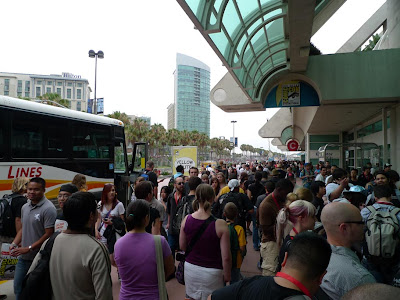 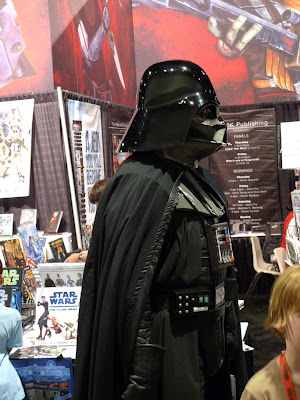 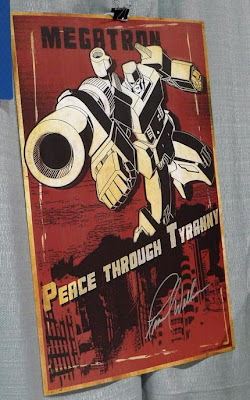 This year marked my first pilgrimage to NerdFest 09, also known as ComicCon. ComicCon is the largest comics convention in the world. It was the biggest thing I’ve ever seen. You could fill the Grand Canyon with the geeks, dorks, and nerds attending ComicCon. If you stacked all the comics from ComicCon, the pile would reach Saturn. Big is not a big enough word. Neither is huge or gigantic. Galactic may work, as it has the ring of science fiction. Essentially, ComicCon is the San Diego convention center overrun with comics and comic-related phenomena, spilling out into downtown.

In addition to the convention on the ground floor, the second floor hosted a continuous stream of panels and talks by some of the best cartoonists around. Sure, if you wanted to see James Cameron and Peter Jackson gab about movie stuff, you’d have to wait 2 1/2 hours in the sun. But for a brilliant cartoonist like Richard Thompson all you had to do was find the right room. I don’t have to tell you people’s priorities are messed up. On the other hand, James Cameron gave people 3D glasses. How can a newspaper cartoonist compete with 3D glasses?

I attended two panels: Richard Thompson and Stephan Pastis. Each was an hour in which the cartoonist showed a PowerPoint presentation of his work then answered questions.

Richard took us on a journey through Richard’s Poor Almanack, his weekly for the Washington Post, and the origins of the daily Cul de Sac. Cul de Sac, as I’ve mentioned before, is the best comic strip in papers today, bar none. His humor is wry and goofy at the same time, which is probably why I identify with it so strongly. He’s also one heckuva artist. Unsurprisingly, he began his career as an illustrator and, as he put it, started sneaking words in until he arrived at comics. Instead of deciding beforehand he wanted to make comics, he slowly realized comics was the best means of expression for him. It was similar (yet backwards) to my own discovery: writing came first and I slowly added pictures. 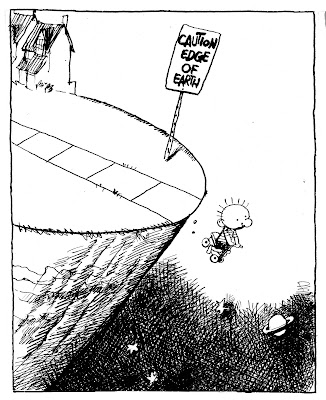 (Below is neither Cul de Sac or Falling Rock. It is an original Pogo Sunday, which I was happily allowed to photograph for free. Buying it would have put me out about 500 bucks.) 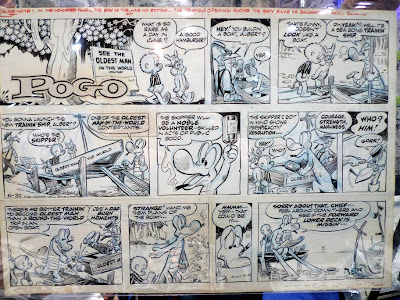 Stephan was cheered for getting his PowerPoint presentation up and running. It was somewhat surprising they had any technical difficulties at all. I would think you could page the convention floor for help: “ComicCon attendees: is there anyone in the crowd with IT experience? Does anyone know how to work a computer?”

It was not surprising to hear Stephan got his initial inspiration from Peanuts and Dilbert, as that aesthetic permeates Pearls Before Swine to great success. He told a very funny story about angering an entire country: Turkey. In one strip, he named a llama Atatürk. This is seen as sacrilege: like a Turkish cartoonist naming a doofus character Washington Lincoln Jefferson. The scandal culminated in Stephan’s receiving an admonishing letter from the Ambassador of Turkey. 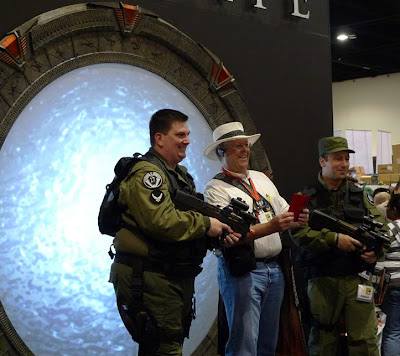 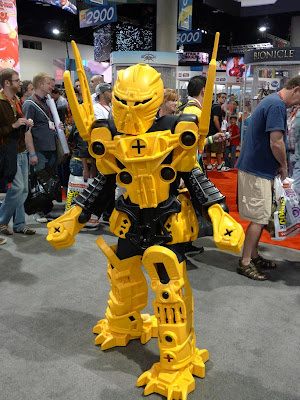 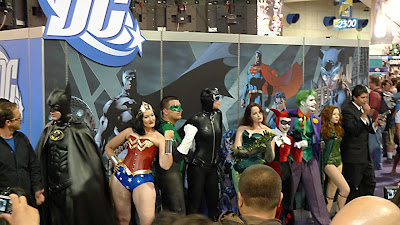 In addition to panels, a good place to meet cartoonists was at their booths.

Jeff Smith signed at Cartoon Books. I was truly surprised when he recognized my comic book. I had sent him a copy a while ago, after I missed seeing him at Stumptown in Portland. The man must have the memory of an elephant, because he said he owed me a letter and made his inscription “To the creator of Falling Rock…” If there’s any cartoonist who is able to make comics accessible to readers of all ages and that don’t necessarily read comics, it’s Mr. Smith. If you haven’t read Bone, Shazam, or Rasl, do it. Now. Now!

Keith Knight (The K Chronicles) generously talked about self-syndication and gave me a badly needed boost to continue promoting Falling Rock. One booth over, Bob the Angry Flower creator Stephen Notley (in full flower regalia) signed my copy of Everybody vs. Bob the Angry Flower. While I was talking to Stephen, Keith interjected some tips aimed at Stephen about how to get Bob into more papers. Keith is not only a great cartoonist but a savvy businessman AND he looks good in a hat. Triple threat.

Kevin McShane, creator of ToupyDoops. When I first got to college, I checked the school paper to size up who I’d have to compete with for space. ToupyDoops was THE strip. Everyone knew it and loved it. Kevin turned out to be a great guy in addition to a talented cartoonist, and my strip, Atticus and Glen, wouldn’t have been as good if I didn’t have ToupyDoops as friendly competition. I was pleasantly surprised to see him again and glad he’s still cartooning.

Steve Lieber, Whiteout. I’m excited to read this murder mystery set in Antarctica. Steve also passed along a preview of his upcoming story Underground, about a cave in a state park in Kentucky and how differently the townspeople and park rangers see it. The townspeople want to open it to tourists and the rangers want to keep it closed for preservation. Values clash! Ed Abbey would have liked this comic, I think.

Scott C.’s Double Fine Action Comics. I’ve been following Scott’s blog for a while now, really enjoying his watercolor prints. Meeting him in person, he struck me as an older, taller, cooler, more successful version of myself. Action Comics is a web comic he later collected into a book. His day job? Video game designer. He also has a beard. Triple threat! 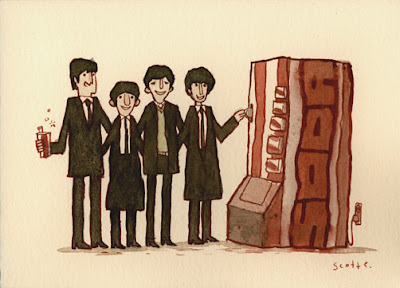 I made new friends; perhaps they saw a guy not dressed as a stormtrooper and thought “he can’t be in the right place.” Christian Ward, whose series Olympus is fantastic and not done with watercolor (but don’t tell anyone). Stephen McCranie is an Albuquerque cartoonist and is as talented as he is tall (he’s tall). 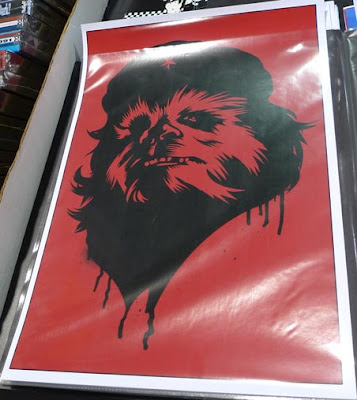 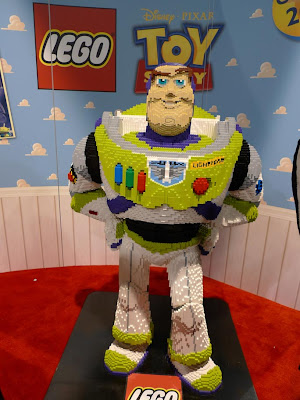 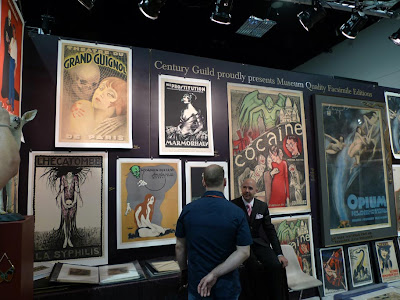 Of course I had to wander the movie side of the convention. It was there that I got all my cool swag, including: a Green Lantern ring that lights up (I’m thinking of going back in time and proposing to my wife with this Green Lantern ring.), a gigantic Watchmen swag bag, a Transformers seat cushion that does not transform into a robot, a light-up Astro Boy pin, an Adventureland key chain that lights up, and a few other buttons and posters that do not light up. 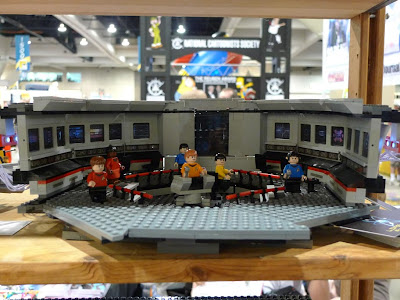 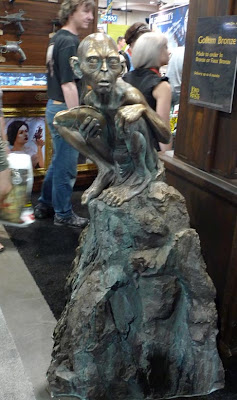 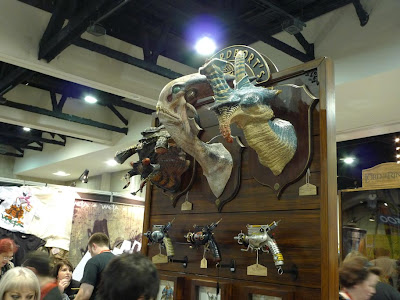 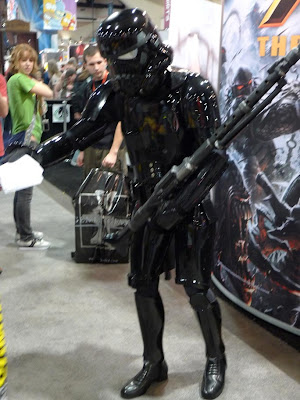 There were no less than two captain chairs from the deck of the USS Enterprise at the Con. One was part of a raffle. Yes, you could win Captain Kirk’s chair. Every time I walked by, someone was getting their picture taken while sitting in the chair. I was recruited for employment at Stark Industries. I saw Kenan Thompson (of Saturday Night Live) walking into a restaurant and subsequently getting stopped for pictures. Seth Green (of Robot Chicken) was doing some kind of webcast from the convention floor. 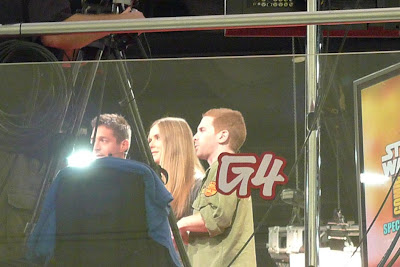 A few celebrities I did not see but were there: Kristen Bell, James Cameron, Peter Jackson, Sigourney Weaver, Johnny Depp, Tim Burton, Henry Selick & Neil Gaiman (promoting Coraline’s DVD release), Eliza Dusku, Denzel Washington (?!?!?!), and more! Since I’m already good friends with Denzel, why try to get together at the busy Con? We’ll just have a beer back at his place in Indiana. 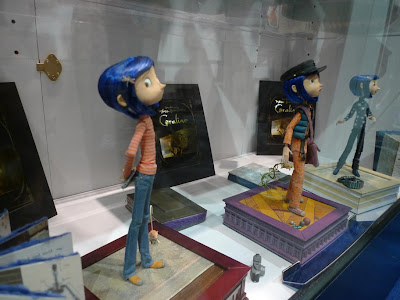 Finally, the ComicCon experience would not be complete without a stack of new reading material to take home:

Neptune, by Aron Nels Steinke. He was not able to attend ComicCon in person, but Aron’s book made its debut in San Diego. Having finished reading it, I wholeheartedly recommend this book to people who A) have either read comics before or not, B) like books or don’t, C) think Dick Cheney should run for President or think he’s the Great Satan. All political joking aside, Neptune is, like Jeff Smith’s Bone, accessible to anyone. I hope it becomes a huge seller so I can sell my signed copy on ebay for 50 million dollars. Which reminds me, I saw an issue of Spider-Man #1 at ComicCon. That shouldn’t be out in the open. It belongs in a museum! 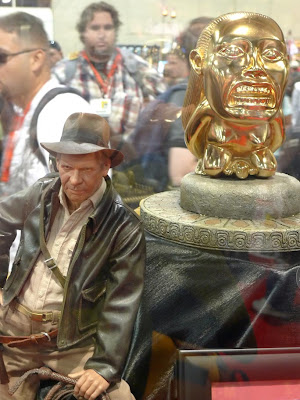 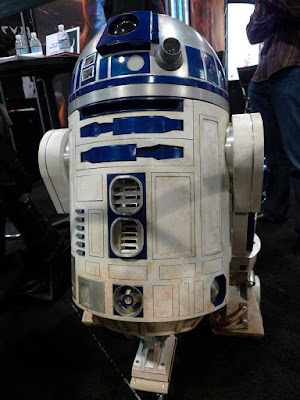 Awesome, epic post that makes me realize where I should have been last week. Nice to see Gollum, too.

I didn't find out how much it cost to get a bronze Gollum of your very own, but pictures were free.

Next year you should come!