Today marks a special day, not just for Falling Rock but for my cartooning career.  While drawing Atticus & Glen for my college paper, I created what has become one of my favorite characters of all time.  His name was Professor Globulus.

Globulus looked like Jabba the Hutt.  He was a combination of all the worst characteristics of college professors, including the (to my knowledge) totally fictitious trait of eating students.

I liked him so much, I brought him back frequently during Atticus & Glen’s four year run.  He even became the villain of my 17-page Atticus & Glen comic book, published at the end of my senior year.

When I ended Atticus & Glen I figured I’d leave all those characters in Ohio.  Dee followed me west, however, and became the starring character in The Family Monster.  Since it was a comic strip about monsters, I couldn’t well leave Globulus out.  He made two appearances, one as a bureaucrat…

And the second as a lowly ranger for an interestingly-named park.

When I began Falling Rock, I knew Globulus would show up eventually, but I couldn’t throw him in unceremoniously.  No, a character of his sliminess needed a good reason to reappear in my work.  It took almost six years, but I found the perfect place for Globulus: Park Superintendent.

Over the next week, you’ll see Globulus in his most recent incarnation.  He’s still troubling Dee.  I doubt he’ll ever really leave her alone.

You’ve all heard of Un-birthdays, right?  It’s the date six months away from your real, actual birthday.  Some people, weirdos mainly, use it as an excuse to celebrate what would be an otherwise boring and forgettable day.  Two days ago was the Un-Birthday of April Fool’s Day.  What I’m not going to do is play a trick on you.  What I am going to do is show you the memorable (and always fun to create) April Fool’s comics that I’ve run over the years.

As many of you know, I drew a comic strip before Welcome to Falling Rock National Park called The Family Monster.  In 2004, my then-girlfriend Isis filled in for me on this installment:

Much inspired by Sex and the City (a feminist literary journal, I’m told), this episode set the tone for future April Fool’s Day comics.

The next year, my friend (and underground pop sensation) Andy K produced this masterpiece.

I hadn’t realized it until this was made, but my four main characters fit the archetypes of the four Beatles.  Who would’ve thought I had unconsciously re-created my favorite band in comic form?  Well, probably everybody who knows me.

2006 marked my brother’s debut as a cartoonist.

He decided to go meta and introduce me as a character in the strip.  I asked my collaborators to make April Fool’s Day strips mention the oddness of the occasion, to let the reader know that, beyond the different drawing style, something was afoot.  My brother took this concept to its very limit.

A few years later, I was drawing Falling Rock.  My friend and partner blogger Nate stepped in.  He really knocked it out of the park.  Featuring Nixon as a disembodied head was a stroke of genius, to be sure, and it made me wish I could have included it during the strip’s regular run.

I flaked out in 2009 and didn’t find anybody in time, so I drew this April Fool’s comic myself.  Since I don’t often draw one long panel, I did that.  And since I love those Easter Island heads (moai), I drew them.

My most recent April Fool’s Day entry was done by my friend Ian.  Since his dad started an ad agency, and since his dad told all his kids to never go into the advertising business, we naturally came up with this:

Modeled after old newspaper ads, and featuring the name of an old building downtown, it was nice to see how my characters would fare if I ever get the chance to sell out.  Believe me, I can’t wait to sell out.  I hear snake oil is big business.

Happy Un-April Fool’s Day, everybody!  I’ve already had some requests for 2011’s episode, so stay tuned…

Here’s another storyline from my old strip, The Family Monster. I’m having fun looking through these. Sometimes they even surprise me by being good. Take this story, where pirates crash in the desert and need Dee, Monster, Dirch and Eggman to help them get going again.

If you look closely, you can see my old web address. And look! It still exists!

For no real reason, here is a week of The Family Monster from April 2004.

Abraham Lincoln has long been a source of inspiration for my comics. He’s the flip side of Nixon in almost every way. Tall & lanky, bearded, and honest by very definition, Abe is probably my ideal President.

For those of you unfamiliar with The Family Monster (the comic strip I drew before Falling Rock), you can read up on its sordid history right here. As you can tell even from this small sampling, its format was more freewheeling than Falling Rock. That is because I had no idea if anyone was reading it. As it turns out, people did read it because I was picked up by the McClatchy-Tribune (formerly KRT) Campus.

Although I’ve left my monsters behind for now, Lincoln shows up in Falling Rock from time to time. So if you’re searching for continuity between the two strips, look no further than our 16th President.

Going through The Family Monster Archive, I discovered that this panel could pretty much stand on its own. 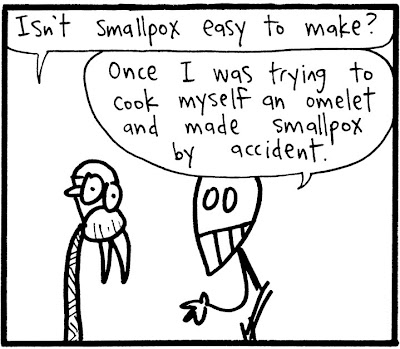 I don’t think of myself as a single-panel cartoonist. This is as close as it gets.